Pin It
First and foremost:  Happy Hump Day to one and all.


Beer in Belgium means something different than anywhere else in the world.  In fact, it is one of the best parts about living in Belgium.  With about 178 breweries (according to Wiki) in a country the size of Maryland, the choices are endless.   Who even knows how many beers are brewed, as there are always special brews on tap.  That is in addition to the beers normally brewed.  It's no wonder Belgium boasts some of the best beers in the world.

There is literally a beer for everyone, even those that claim they don't like beer.. If you think you don't like beer, then you haven't been to Belgium.  Beer is to Belgians as Wine is to French and this past weekend we went to a festival and saw Belgians in action (along with a tremendous amount of people from all over the world drawn in by this festival).  The people who go to these festivals are serious about beer.  Although this seemed more laid back (atmospherically) in comparison to the Christmas beer festival I went to this past December, mostly because there was more room to move around so the people sipping on beer, taking notes on their excel spreadsheet on the smell, color, carbonation and flavor from start to finish, wasn't quite as noticeable.  Not that there is anything wrong with that.  We attempted to take some notes, but after a few 8+%ers it wasn't so easy (see below).   Though, it seemed more laid back in that sense, this festival was for serious beer lovers (and novices alike).  Until a few months ago, I never knew what a beer lover I was (yes, I would use the word lover).  Of course, I don't compare to the many people at the festival.  My palette isn't quite as sophisticated.  I still enjoy a Miller Lite now and then... but when in Belgium.  Move over Miller Lite, Hello fill in Belgian beer here.  Of course, nothing against Miller Lite, it's just more of a tailgating type beer, I am a Wisconsin girl after all. A shot of the festival... see the stands in the background and the many beer taste testers.

Onto the details!  We went to the 9th annual Zytho's Beer Festival this past weekend with a few friends (we also made a few friends).  With over 104 brewers and more than 490 different beers, the world was our oyster, or our 15 cl glass.  Decisions, decisions and at 1.40 per tasting, its a steal, especially for the specialty brews that are featured.  Trust me, this is not an easy decision to make. 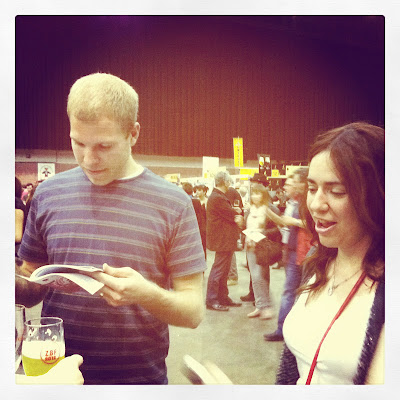 We had to study our guide book in order to make educated decisions. 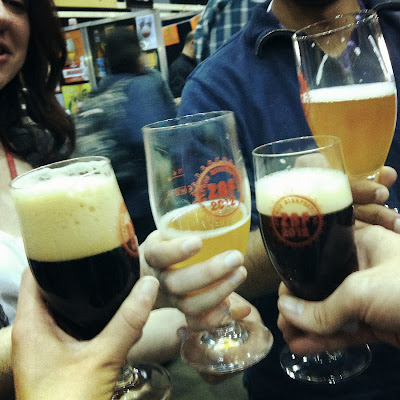 The first round of brew.  From Geuze to Pale ale to Dark beers. 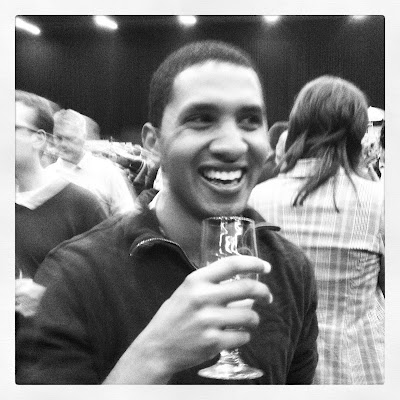 Bruce was happy with his choice, Oude Geuze from Oud Beersel Brewery.  He says it is one of his favorite Geuze beers.  More on Geuze beers in a few weeks, after we visit Cantillon Brewery in Brussels. 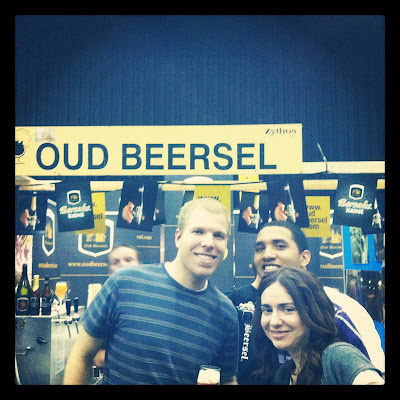 Our posse in front of the above mentioned Oud Beersel Brewer stand.

After a few beers, I needed some frites.  While in line I made some friends.  I get a little social after a few testings.  My friends ranged from a few middle aged Belgian woman, who gave me some recommendations, which I gladly accepted of course, to a beer writer from L.A., to an actual Brewer.
Funny enough, we had already tried a beer, Koeketiene, a blond sour citrus-y beer, from the brewer, Thijs Maenhout, we met.  Our notes said "Tasted Fresh, we liked."  As I mentioned above, out notes weren't so very detailed, but hey, I think the brewer was pleased when I showed him.  I also tried Hoppa Hontas, which was another blonde beer from Maenhout, a bit more hoppy but also very good. 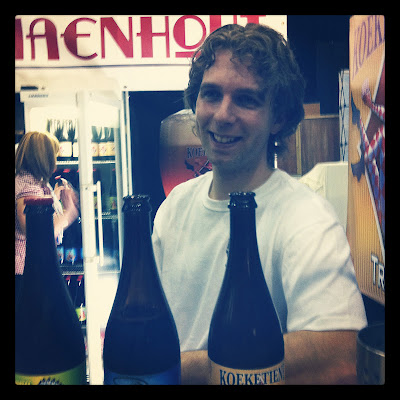 We tried so many different kinds of great beers at the festival, I can't even name a favorite.  I can tell you though, that my favorite type of Belgian beers have to be the dark ones with a hint of spice and caramel and a long finish with medium to high carbonation (that description sounds a little professional, no?).  I like to refer to the ending ka-pow taste as "thowdown."  When I try a beer that fits these qualities, I say "it has a mean throwdown."  Alternatively, when it is lacking, I like to say "It was good, but there was no throw down."  I am also a fan of blondes with a hint of citrus..and geuze... and the occasional pale ale.  However, there is a time and a place for every type of Belgian beer and after meeting some of the brewers, I have no doubt they are all brewed with TLC. 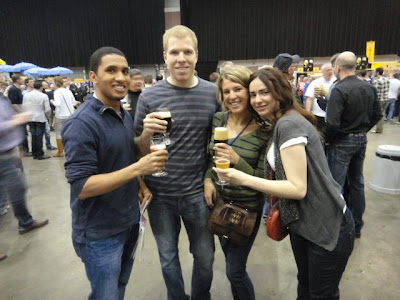 Bruce, Paul, Me & Claudia at the festival

This weekend we will visit the Westvleteren Brewery (said to be one of the best beers in the world)... I am pretty sure that this beer has throw down.  I tried it once before, but that was before.  I'll let you know in an upcoming post.  Don't fret.  Until then, Cheers!

In the spirit of beer... This looks like a good recipe to try! 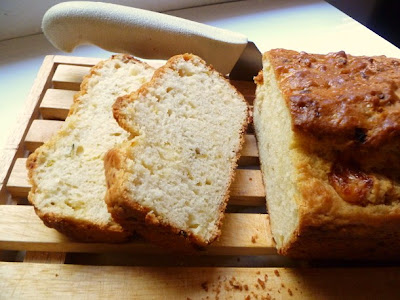 OH... and NO I didn't forget.  The winner of the Savino Photography Giveaway is........Jamie Ganas!  Thanks for liking aglobetrottersfare on facebook Jamie! 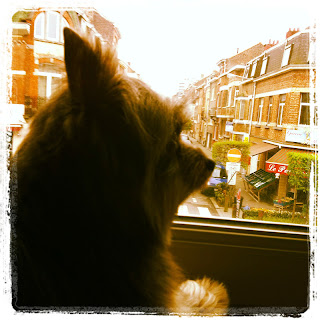 Last night with Izzy.  She is a sweetie pie.
Pin It
Email ThisBlogThis!Share to TwitterShare to FacebookShare to Pinterest
Posted by aglobetrottersfare at 8:20 PM

An informative post! I am visiting Belgium with my family for our winter vacation. I heard that there will a Christmas Beer Festival in Belgium. I am not a fan of beers but this event might change that.