Pin It I woke up on Saturday morning to Paul looking up different hikes in the Wallonia region of Belgium.  It's been something we have wanted to do for a while, but either the weather didn't permit or we had other plans.  Paul found a 7km hike just outside of Falaen, Belgium that looked interesting so we thought we'd go to the starting point and find the path when we got there.  Apparently, a little more research would have done us right.

We started at the Ruins de Montaigle, as the website said.  We weren't quite sure where to go from there, but within a few minutes we found what we thought was the path. 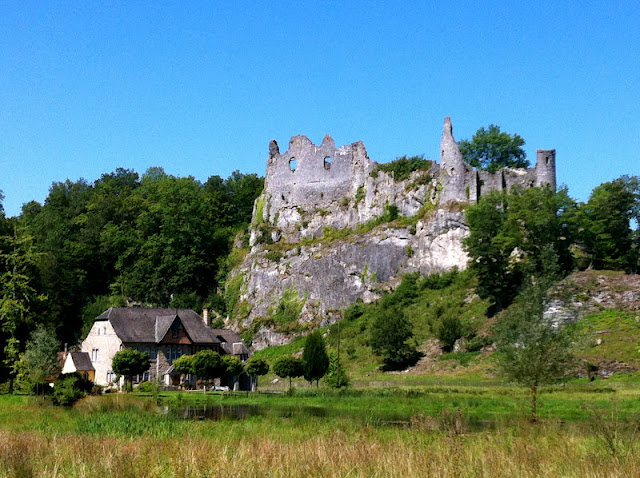 After about 2 hours, through woods and farms fields and even some small villages, we didn't feel like we were going in the right direction (read:  back where we came from) but decided we had invested too much time to back track.  So we carried on. 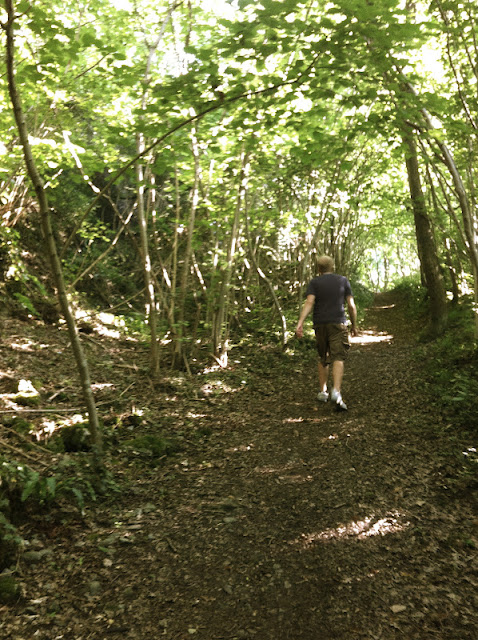 But, it was a gorgeous day and we were enjoying ourselves.  Seeing a few interesting things along the way.  We weren't overly concerned.  We were on the path following the red and white stripe sign,  NBD. 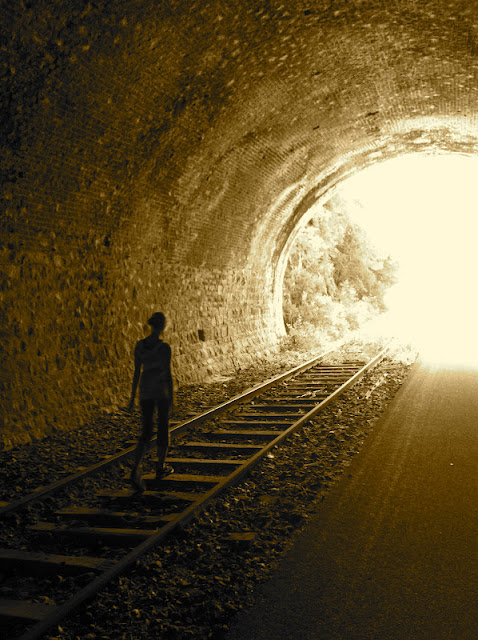 We came across some old rail road tracks...... 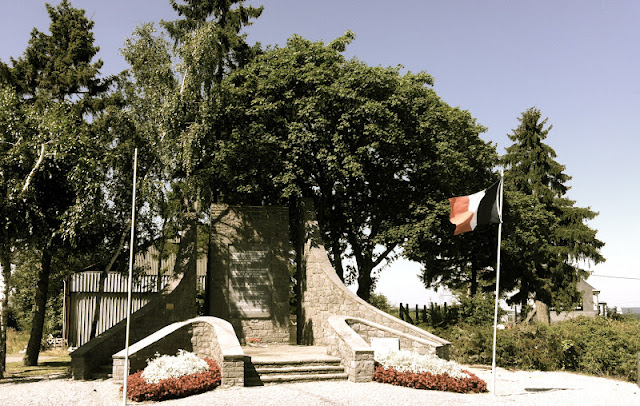 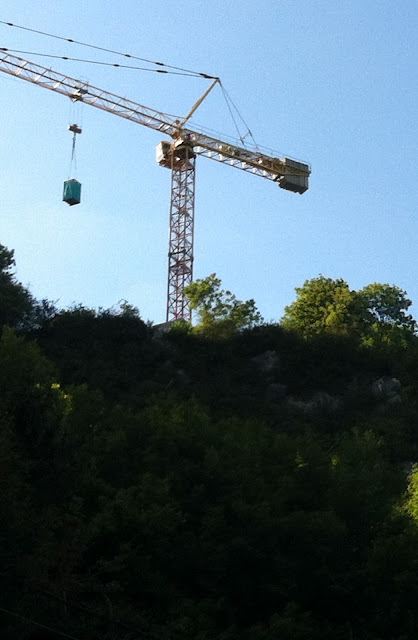 & a port-a-potty hanging from the sky.  Strange?  I thought so.

After about 3 1/2 hours, we started to wonder where this path was taking us.  We were getting a little tired, a little hot, a lot thirsty and more than a little bit sick of walking around in the middle of no where.

After about 4 1/2 hours we started thinking this must be some kind of sick joke.  These red and white stripes don't lead anywhere!  Well they lead somewhere, just not where we want to go.

Then, we started to hear some loud bumping music.  When we came to a clearing, we saw the city of ........Dinant: 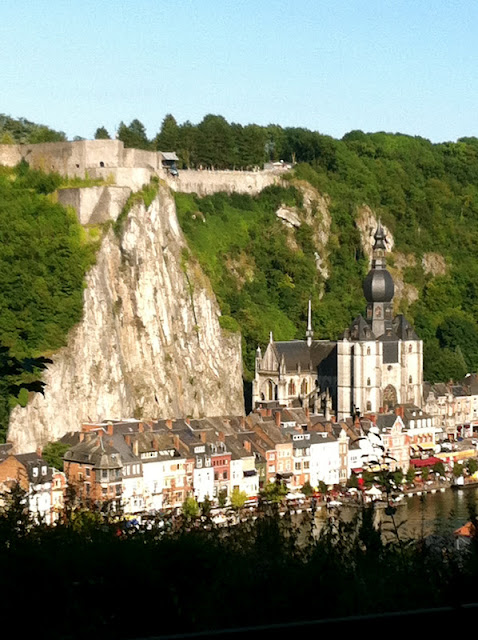 Now, we didn't know how far Dinant was, but we knew it wasn't close to where we started.  So this wasn't exactly a good thing.  We decided to continue in the woods on the path and by pass the city.  I know what you're thinking.  After about 10 minutes, I think we could hear each other thinking "is this a good idea or completely nuts?!"  Thankfully we both agreed on the ladder and headed back to the city.  This was our chance to figure our where the heck we were!  While, it was only 7pm and we still had a little over 2 hours of daylight left... we had no idea where this crazy path was even taking us. 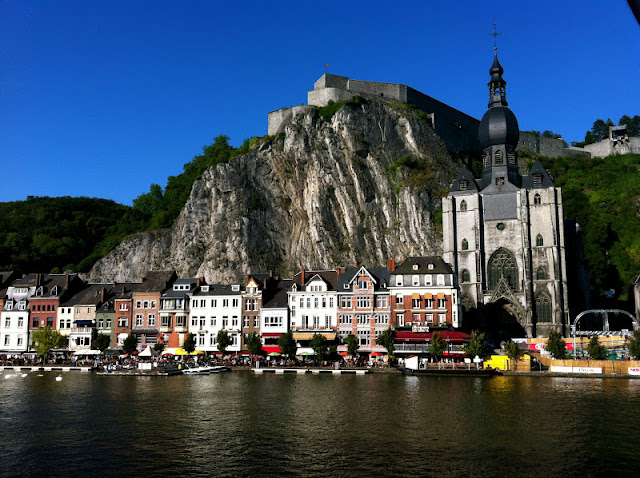 Dinant looked like a really cool village, one we definitely have to go back to.  We thought about stopping for a drink, but our responsible halves kicked in (damn them!) and we thought better to figure out our action plan.  At the tourist information we found a map and realized we had gone in a big triangle and would have at least a 3 hour walk to get back to the car. 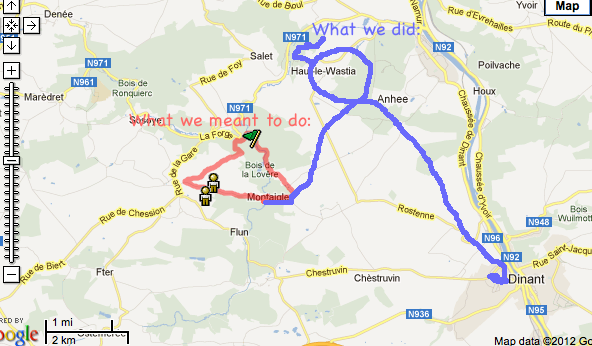 We decided our best bet would be to head to the train station.  We asked the ticket booth worker if he spoke English, but no such luck... so in our best French we said where we needed to go.  He shook his head "no train."  Luckily, a man and woman overheard us and offered to help.  He translated a bit for us and we explained that we needed to go to Falaen.

The man suggested we go to Maredsous, as there was a bus that would take us there and it isn't too far from Falaen.  The train guy seemed to think this was a good idea.

We looked out the window to the stop and right there was the bus to Maredsous!  The guy told us to run.  We did, but were nervous about what we would do once we got to Maredsous, obviously.

I asked the bus driver if he spoke English, again no luck (boy, we are spoiled in Brussels).  I looked out to the man and gave him a pleading look, as if to say PLEASE HELP!!  Thankfully, the driver wasn't in a hurry and the man made it to the bus and explained where we needed to go.  The bus driver shook his head.  He doesn't go to Falaen.  The man asked about us walking from there.  The driver looked at us like we were crazy and said something to the man.  The man then asked if we had a place to stay when we got there, as there would be nothing in the village and it was getting late.

He didn't seem to mind.  We forked over the 6 Euro and after about a 15-20 minute private bus ride (without stops) got dropped off directly  at our car just outside the Ruins de Montaigle. 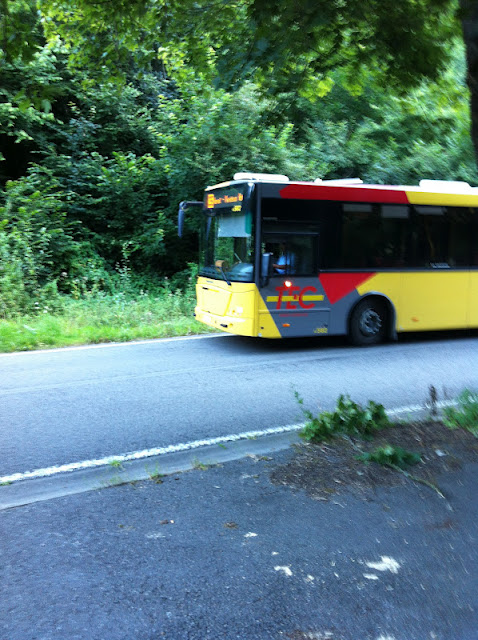 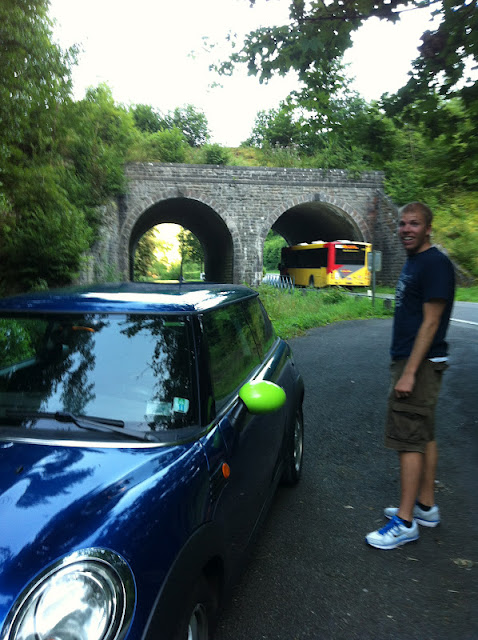 We were literally jumping for joy.  Needless to say, go ahead and go to the Ruins de Montaigle, but don't follow the red and white striped signs.  Who knows where you'll end up!?  I still wonder.  In fact, I am losing sleep over it.

Next up is a Falafel Inspired Veggie Burger. Nom Nom.  No, I didn't make this when we got home... we went straight to Domino's, got two larges and scarfed them down immediately.  It was amahzing. 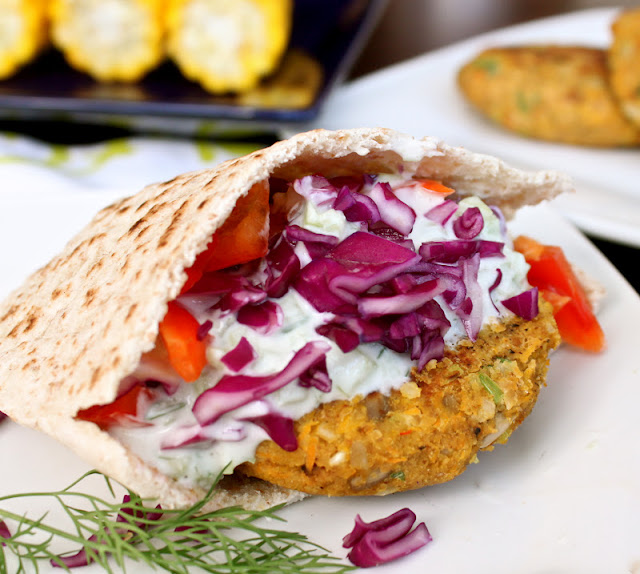 
Pin It
Email ThisBlogThis!Share to TwitterShare to FacebookShare to Pinterest
Posted by aglobetrottersfare at 10:15 PM

O.M.G.!! Awesome story...but thank goodness you two are ok! You'll be telling this story to your kids someday. :)

(p.s. I wonder if that was a Manitowoc brand crane you saw...hehehe)

It was pretty crazy, but we were lucky and ended up having a blast! It's probably a Mani crane. hehe! ;)