Pin It Out of 5 recipes, this is already my second soup post.  But, I love soup.  What's not to love?  It's easy, you can pretty much throw whatever you want in it and it's perfect for winter.  I recently discovered leeks.  Though they can smell strong and oniony, they have a great flavor when cooked (I still don't like raw onions), and anything with potato is generally delicious.  This recipe comes from a combination of two different potato leek soup recipes from foodnetwork.  The first being Potato Leek Soup by Robert Irvine, and the second a recipe from Foodnetwork Magazine.  Though these recipes were my inspiration, I didn't follow either to a tee, although I am sure both would be delish.  My version is a semi-lightened up loaded baked potato/potato leek soup concoction or Creamy Potato Leek Soup.  I have to say, it turned out pretty good. 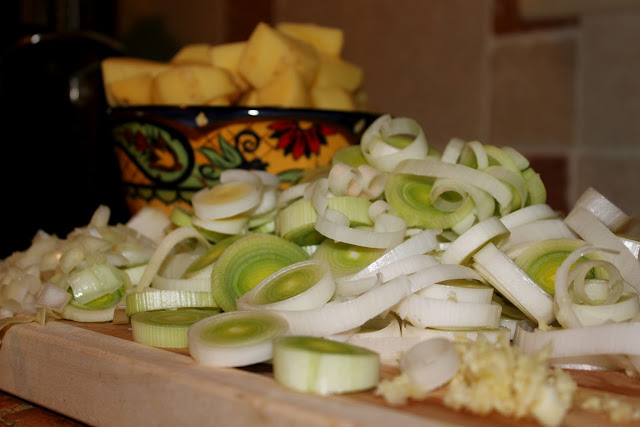 Start by peeling and roughly chopping 8 medium potatoes.  Continue to chop 5 large leeks, white and light green parts only.  Then dice three cloves of garlic and one small onion. 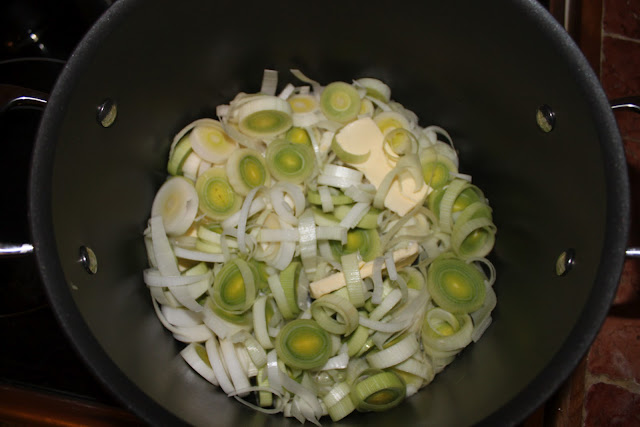 Fry about 5 pieces of bacon in a hot pan until it is crispy (not shown).  While the bacon is frying, start melting 4 tbs of butter in a large stock pot and add the garlic, leeks, and onion. 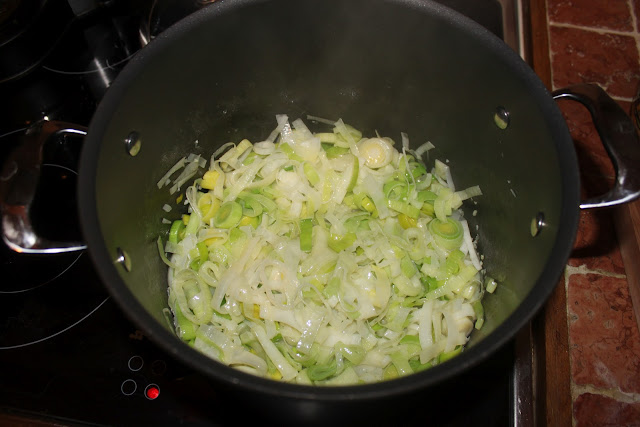 Put on cover and cook until leeks are softened, about 10 minutes on medium heat. 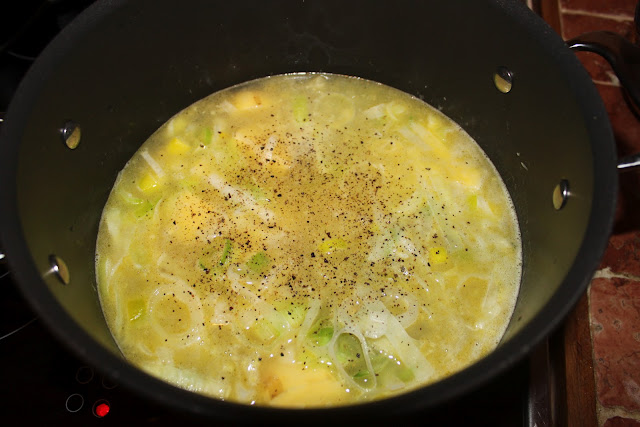 Add 6-7 cups of water and 3 chicken bouillon cubes.  Add potatoes.  Salt and Pepper and bring to a boil, then let simmer for 20-25 minutes until potatoes are softened. 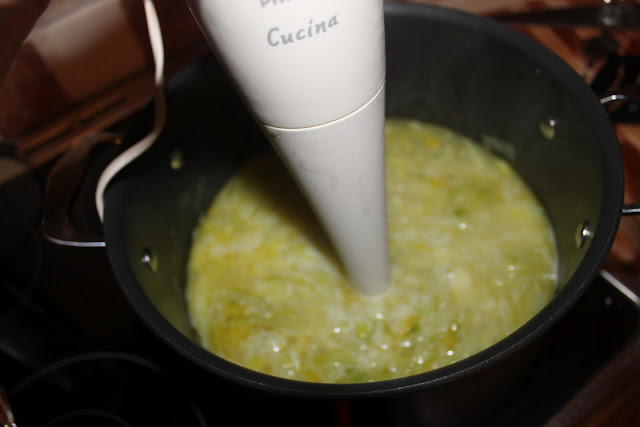 Once potatoes are softened, blend with immersion blender until soup is your preferred texture.  I like mine with little potato pieces still in tact.  Once blended, stir in 1 cup of 2% milk and some frozen corn (no photo, because I got too excited to get it in the bowl and start chowing down!).  Cook until corn is crunchy and serve. 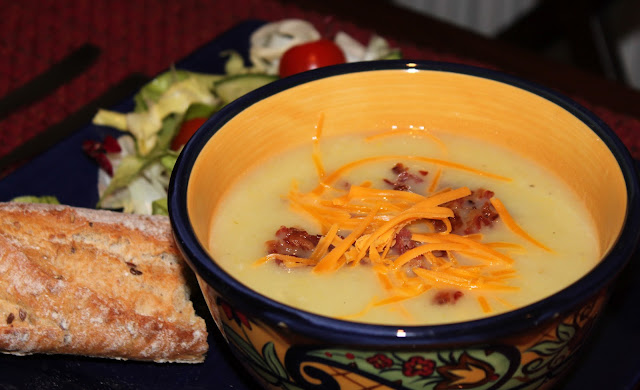 Garnish with chopped crispy bacon and shredded cheese.  Some sour cream and sliced green onion would also be good.  Serve with some crusty bread and a side salad and you have yourself a hearty meal!  (it was seriously good, maybe better than the photo looks...)

Peel and roughly chop the potatoes.  Cut the leeks into thin slices.  Dice garlic and onion.  Fry the bacon on a heated skillet until crispy.  While bacon is frying, start melting the butter in a large stock pot on medium heat.  Add the garlic, leeks, and onion.  Put cover and cook until softened.

Once the bacon is crispy set on paper towel to get rid of some of the grease.  Then chop into small bits.

Once the leeks are softened add the water and chicken bouillon (or chicken stock).  Add a dash of sea salt and cracked pepper.  Add potatoes.  Bring to a boil, then simmer for 20-25 minutes or until potatoes are softened.  Blend using immersion blender (or cool, and blend in a blender).  Add 1 cup of milk and 1 cup of frozen corn (it adds a nice crunch).

Garnish with deliciousness and serve.

Bon Appetit!
Pin It
Email ThisBlogThis!Share to TwitterShare to FacebookShare to Pinterest
Posted by aglobetrottersfare at 9:42 PM

I have made the soup yesterday and it was delicious. Thank you Erika for this recipe.