Pin It A few weeks ago we took a long weekend trip to Istanbul.  It's been on our list for a while, and we were in the mood for a different kind of travel experience.  We arrived to some rainy conditions but made the most of it and because of the rain, took in a lot of the sites (much more than usual, which was actually great because Istanbul is like no other place we have ever been before).  We started with the Blue Mosque.  I think it was the first time I have ever actually been in a mosque and this one was beautiful.  I was surprised at its beauty, maybe because I didn't do a whole lot of research and wasn't sure what to expect. 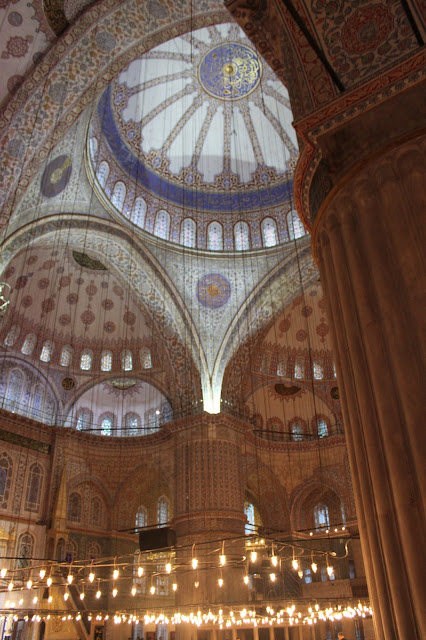 The detail was incredible and like usual, pictures don't do it justice.  The Blue Mosque is not just a tourist attraction, there were many people praying while we were there. 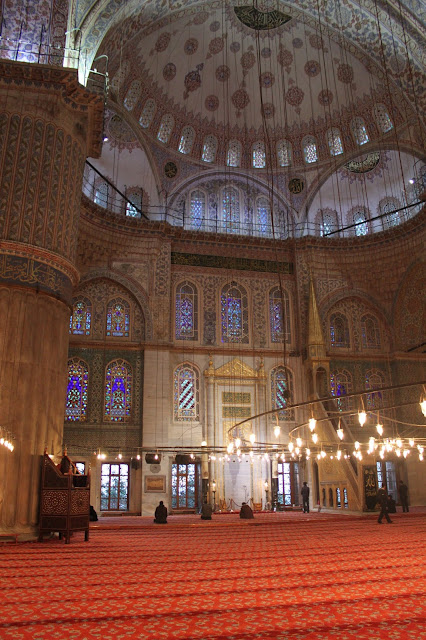 The only negative was visiting on a very wet day with soaking wet socks, as you must take your shoes off out of respect.  It smelled a little like wet feet, but its beauty made up for it.  I had some trouble getting my shoes back on in the rush of leaving the mosque - the big belly kind of gets in the way.....

Afterwards we enjoyed some amazing Turkish Moussaka.  And that tortilla thing... I don't know how they do it.  Light, fluffy, delicious.  Turkish cuisine is nommm nommmmmm. 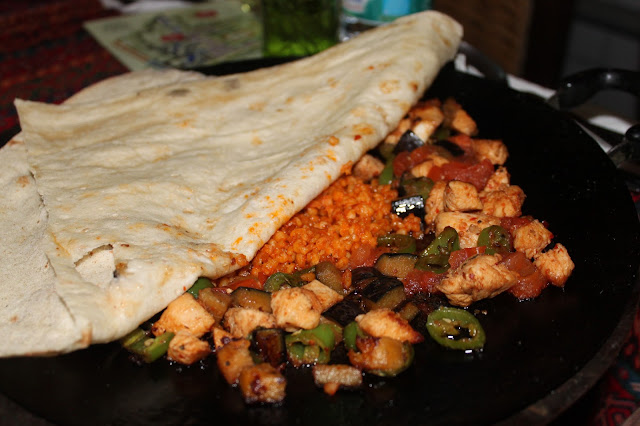 The next day, we hoped for better weather, but had no such luck.  We started the day off by checking out the Basilica Cistern, which was also quite impressive.  The Cistern was built in the 6th century and was used to supply and store fresh water.  Walking through the Cistern, you realize what a marvel it was for its time (and still is!). 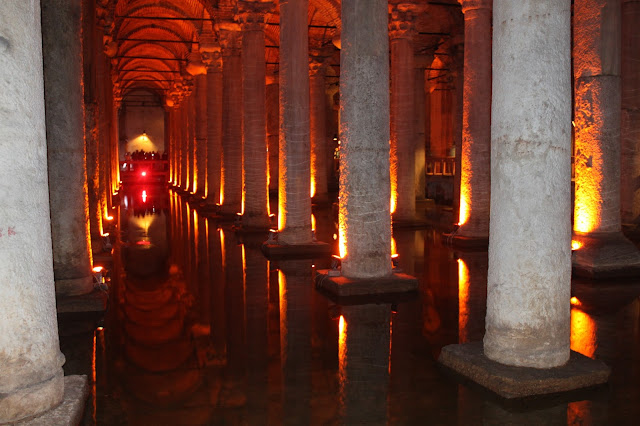 Here is where I made Paul dress up like a sultan so we could get a photo as sultan and sultana... normally I don't fall for this kind of stuff, but I couldn't resist!

It was still raining so we went to the Hagia Sophia.  This was also very interesting because at one point in time it was an Orthodox Church, then later converted into a Mosque and is now a museum.  You can see the influences of Christianity and Islam as you walk through the museum.  Many of the old frescoes from when it was an Orthodox Church were actually preserved when they were covered by plaster when it was turned into a Mosque.  You can see influences from both periods in the photo below. 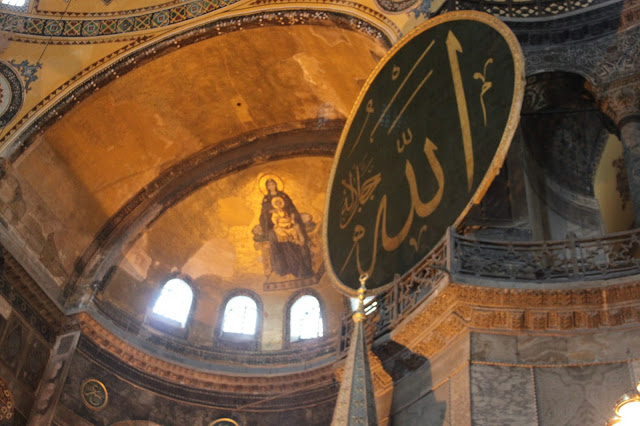 See what I mean?  We did a lot of sight seeing.

Next stop was the Spice Market.  I had planned on buying some spices and tea...... 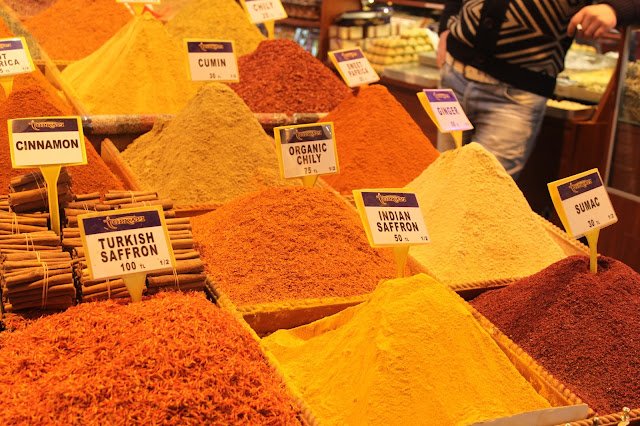 but only bought Turkish Delight (the special Turkish Candy).  Oops! 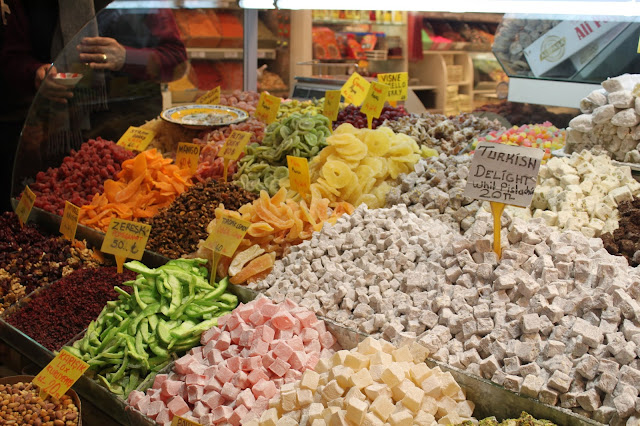 We headed over the Galata Bridge to the New part of town for some St. Patty's Celebrations.  Lots of fisherman were out on the bridge, waiting for their catch of the day. 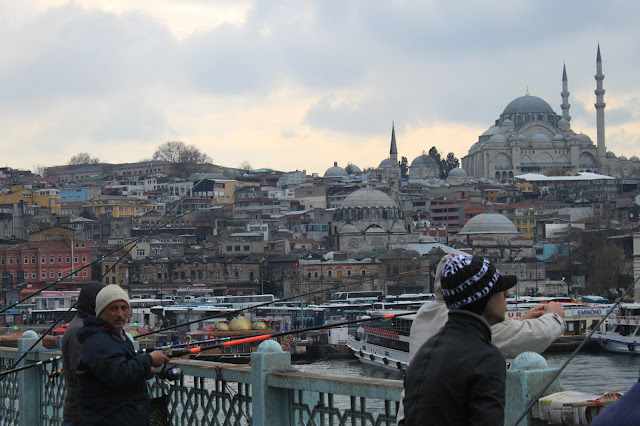 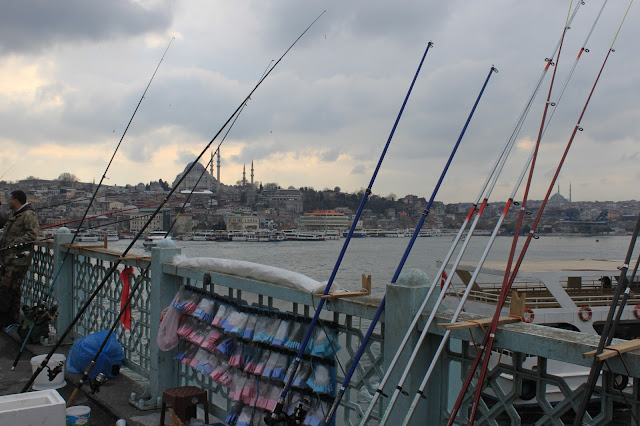 Then we found on of the only Irish pubs in Istanbul that had a pretty awesome 12 piece band on a tiny stage.

The next day, the sun was shining and we took a boat cruise on the Bosphorus Strait, that connects European Istanbul to Asian Istanbul.


A view of the New Mosque (I think), the Galata Bridge and the European side: 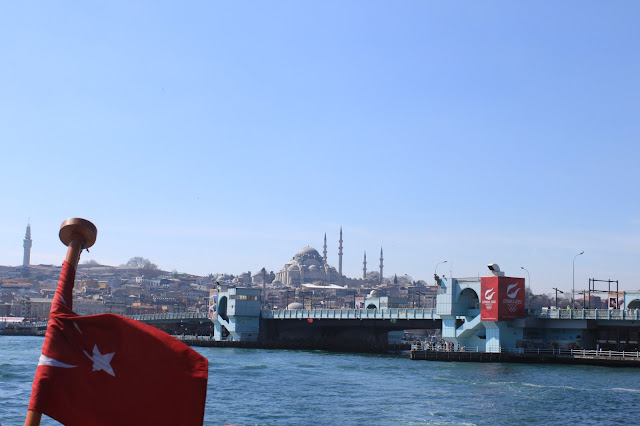 A view of the bridge to Asia: 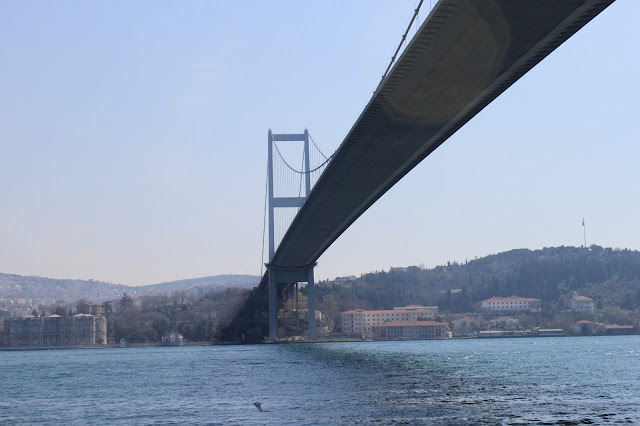 Finally, we made a stop at the Grand Bazaar..... 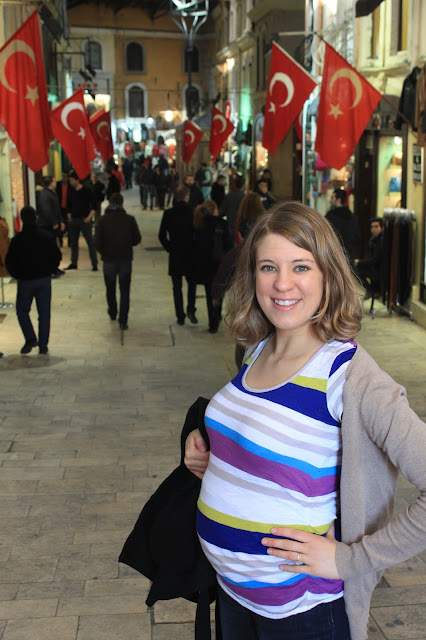 and bought nothing!  What kind of girl am I?

The next day before our flight we spent some time walking around some parks near our hotel and I got my boots shined!  First time they have been shined in a year and a half!
I think you can see the difference: 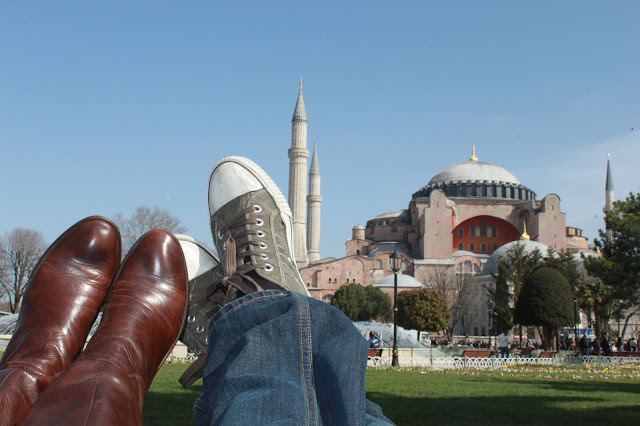 In front of the Hagia Sophia
Pin It
Email ThisBlogThis!Share to TwitterShare to FacebookShare to Pinterest
Posted by aglobetrottersfare at 10:11 PM

I'm glad you guys had a nice time and I love the baby bump.

YAY! Another baby bump pic. You look cute as ever! :)

Thanks everyone! It is quite a bit bigger now, since that was almost 4 weeks ago!!