A Short Weekend in Berlin!

Pin It A couple weeks ago we took a little road trip to spend a short weekend in Berlin.  Let me just tell you straight out, a short weekend trip to Berlin will not cut it.  A long weekend trip to Berlin won't cut it either.  There is so much history, so much to do, so much to see, we needed more time.  But, we definitely enjoyed the time we spent while there.  It's not a beautiful historic old city as you typically see in Europe, due to the fact that most of it was destroyed in the War, which was then followed by an era of communism in half the city.  You definitely see the lasting effect.  However, the city is now booming with awesome places to go, a bounty of interesting museums, a cool culture and loads of history right in front of you.

When we got there we headed to the Museum of Topography of Terror.  Located at the actual Gestapo and SS headquarters site, which have since been destroyed mostly by Allied bombings in 1945.  The museum focuses on the timeline of the reign of the Nazi and SS through pictures and documented facts.  It shows you the effects of the Nazi reign all through out Europe.  The museum was so well set up and you could easily spend a few hours there (as we did).

The next day we had the best breakfast I have ever had in Europe.  So it is an American Style breakfast, but sometimes cold cuts and bread just won't cut it.  This hungry momma wanted some pancakes!  Enter Berlin's California Breakfast Slam. 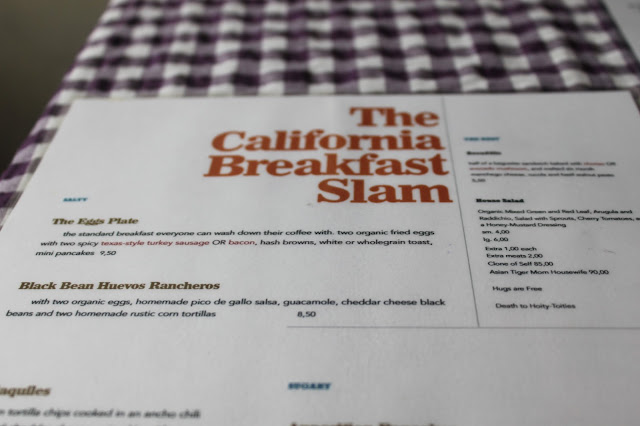 Yes, in the right hand corner that says "Hugs are Free" and "Death to Hoity-Toities."  There is also a section on the menu which explains some unfortunate events if you are not respectful to your wait staff.  So, be nice. Oh and you see above, an Asian Tiger Mom Housewife is on the menu for 90 Euro, seems like a steal to me.

While an Asian Tiger Mom Housewife sounds interesting, I was in pancake mode, and pancakes I had.  Saturday and Sunday at the Breakfast Slam. 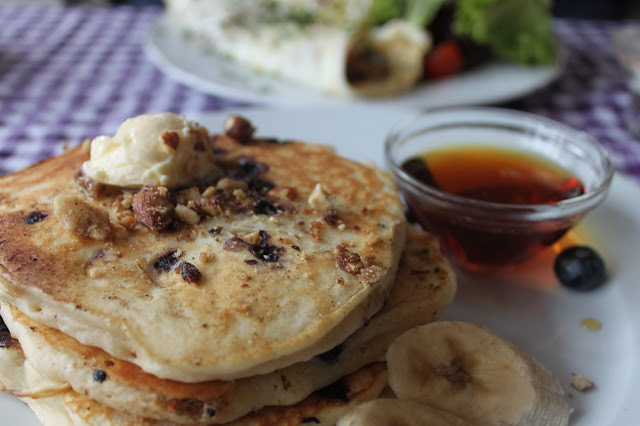 Now, this California Breakfast Slam comes highly recommended and even made CNN's list of Best American Restaurants in Europe.   Paul had an amazing Egg white omelette, stuffed with mushrooms, tomatoes and Parmesan and some mystery spices that made it one of the most exciting omelettes ever.  Try that with a side of home fried potatoes topped with fried goat cheese and we are in business.  Nom nom. 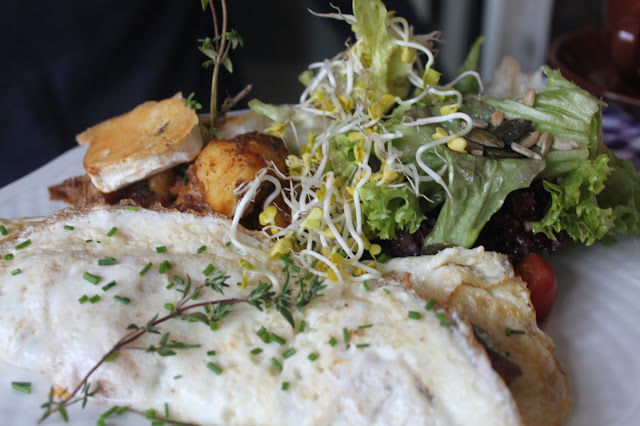 Now, the next day (Yes, we went back for round 2, it's not everywhere you can find a breakfast like this!), may have even been better, but I forgot to take photos.  This time our friend Bruce came with us.  I had Banana Walnut pancakes (this pregnancy has me all about anything cake related!), Paul had Huevos Rancheros, and Bruce, who is not so into breakfast had the Chilequiles... mmmmmm.

Just to note if you are planning on heading to the Breakfast Slam while you are in Berlin, it's a good idea to make reservations by email (check out their facebook page, link above).  While Saturday we were able to easily get a seat, Sunday they squeezed us in but you might not be so lucky.

After we filled our bellies with fluffy pancakes and flavorful omelettes day 1 at the Breakfast Slam, we headed back downtown to jump on the  New Europe Free Tour.  Now, I have been on several of these tours throughout Europe and have never seen so many people.  Unfortunately they didn't have enough staff, and being so relaxed getting there we were a little late and ended up being turned away.  My advice to you, if you are planning on doing the New Europe Free Tour, get there early!  At least 15 minutes, so you ensure you get on the tour.

While I was pretty dissappointed, to not get on the general tour, there were a few other tours starting at the time and we decided to join the Red Berlin Tour with David.  This tour was absolutely fascinating, and if you have some extra time in Berlin, I would highly recommend it.  This tour obviously, focuses on communism in Berlin, the set up of the Berlin Wall, stories of Berliners still alive today who lived through it (after all, the wall only came down in 1989), and many tragic stories of how the wall effected the Berliners lives.  It gives you a glimpse of what Communism life was like in East Berlin.  Shown below is a Memorial to the people who lost their lives trying to escape from East Berlin to West Berlin. 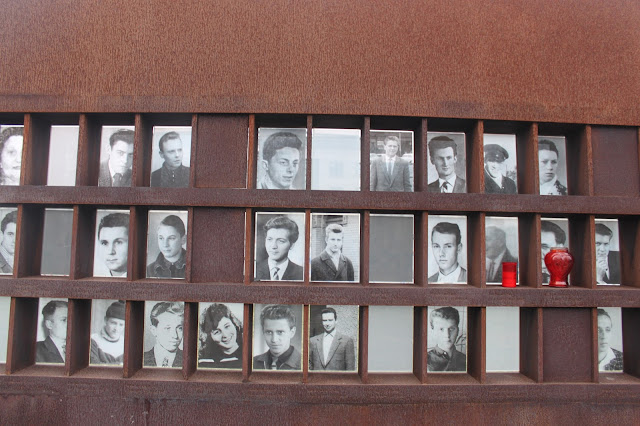 One of the coolest parts of the tour was seeing the East Side Gallery, which turned the former Berlin Wall into a canvas for artists all around the world. 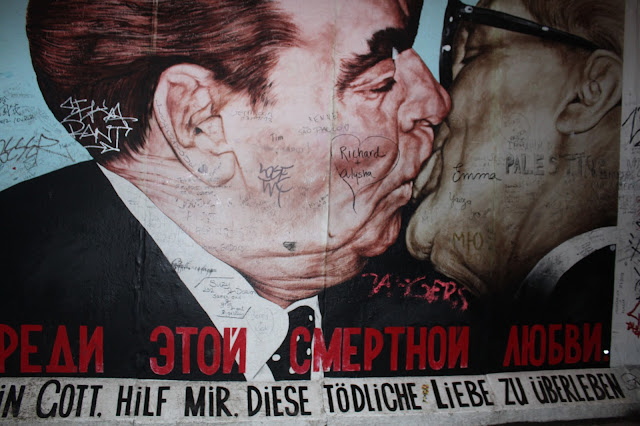 Known as My God, Help Me to Survive This Deadly Love, or Fraternal Kiss, is one of the most famous paintings on the Berlin Wall. 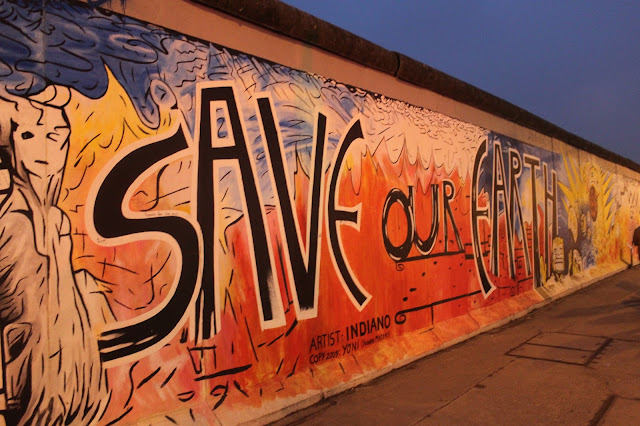 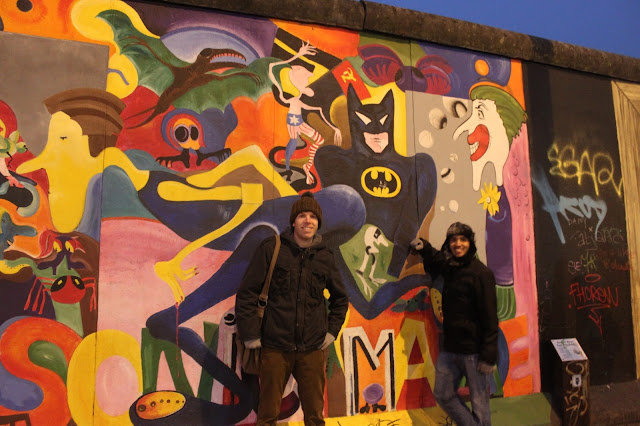 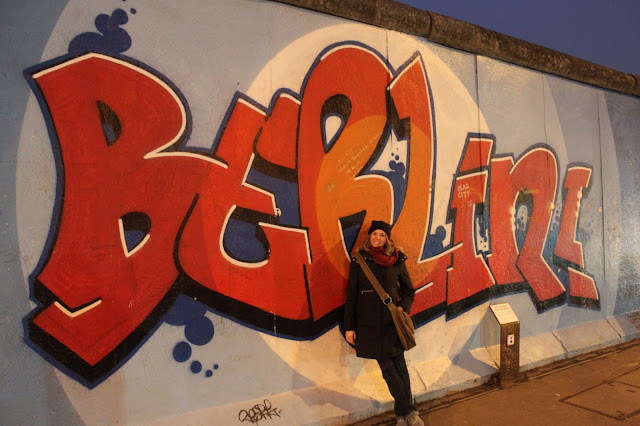 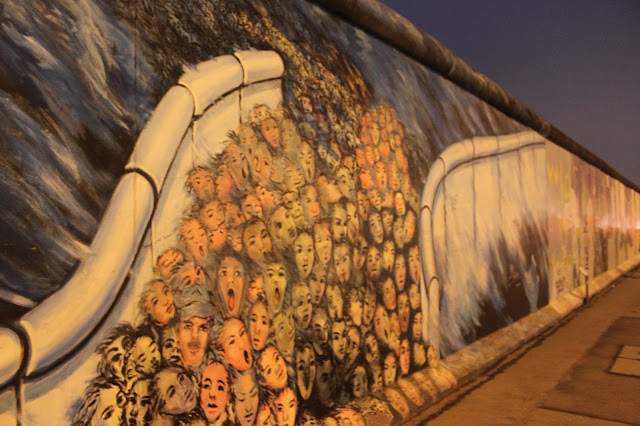 After we checked out the East Side Gallery it was time to catch a film at the International Film Festival, Side Effects, which pretty much sums up our awesome weekend in Berlin. 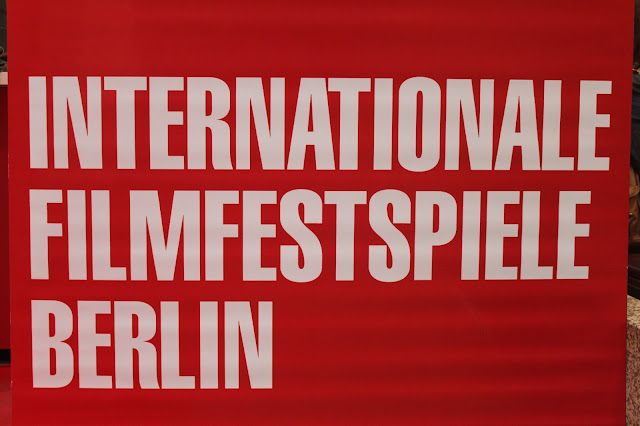 Pin It
Email ThisBlogThis!Share to TwitterShare to FacebookShare to Pinterest
Posted by aglobetrottersfare at 1:02 PM