Pin It Wow!  I should be ashamed of myself... I have been so wrapped up in only God knows what that I missed my Blog-o-versary!  A few months ago I was really looking forward to that day.  I had so many thoughts of what I would make to celebrate my blog-o-versary, and I downright missed it.  Hopefully I am out of this so-called "blog rut," long enough to prepare a fantastic 2 year blog-o-versary celebration.  Keep your fingers crossed.  I was contemplating giving up on the good old blog.  It's just such a time commitment and when you are lazy like me (especially lately), and your mac takes a crap, it can become a burden.  Blogging on a PC?  I don't like.  But enough about that, I'll just blog when I feel like it and in this upcoming year there will be some changes.  Now's not the time to quit.  I would hate to give up on the blog when my life is about to change so radically... and there is still travel and sometimes food to be documented!  So, speaking of travel, I'll pick up where I left off:

Capri.  It had been a dream of mine since I was 17 and I saw a photo of Capri to have my honeymoon there.  While, honeymoon it was not, and the weather didn't quite cooperate (the story of our trip to Italy) we still had a nice evening on the island and it was actually a gorgeous sunny day when we left Amalfi and headed to Capri!  This was on the Amalfi Coast drive somewhere between Minori and Sorrento.  We finally got some much needed Vitamin D! 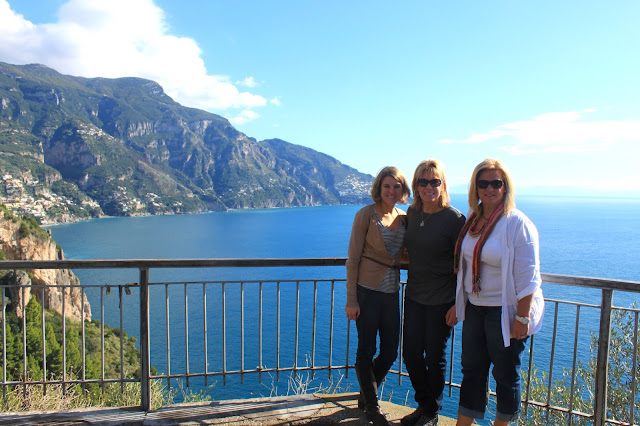 We took the ferry from Sorrento to the Island.  Then continued on an insane bus ride up to Anacapri, where we were staying (literally translating to "above Capri").  As the bus drove up the hill side, there were some spots that looked straight down to the sea.  I pretty much loved every minute of it, but if you are afraid of heights, grab an inside seat.  Once we got to our really charming hotel with views over Anacapri, we decided to head to Capri and grab a drink.  While I had heard drinking & eating & doing pretty much anything in Capri can clear out your pockets, we weren't quite prepared to pay 10+ euro for a .25 beer in the city center.  So, we walked onward.  Thankfully, because we can across a sign that said "Arco Naturale."  I had read about this footpath and it was one of the things I wanted to see on Capri.  We took a chance and followed the signs through the winding village.  There was definitely some climbing involved (as with anything in the South of Italy).  According to Frommer's there are some "800 odd steps" to get there.  But the view. was. spectacular. 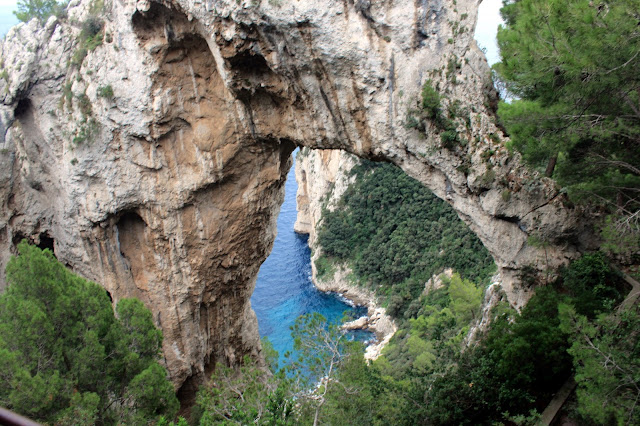 and with our feet. duh. 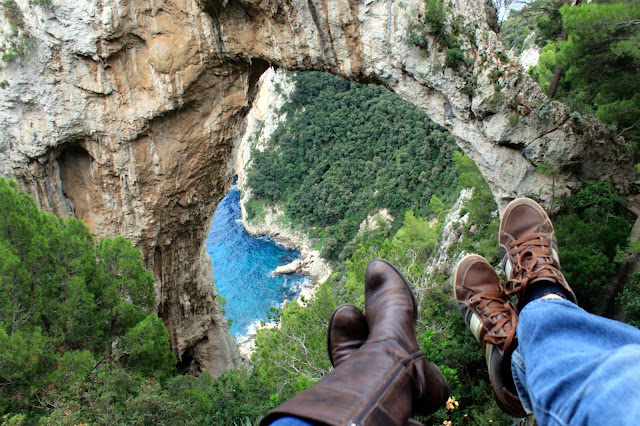 We made our way back to Capri through little paths like this: 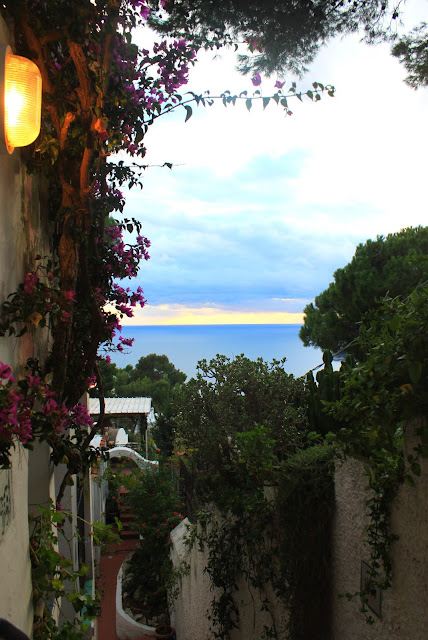 and then hopped on the bus back to Anacapri.  We had dinner reservations at a small, local restaurant that our hotel recommended.  The food was delicious and the prices were reasonable for the island.  If you go to Capri, staying in Anacapri is much more affordable.  We took in the view from our hotel before going to bed.  We were exhausted.  Good night Anacapri. 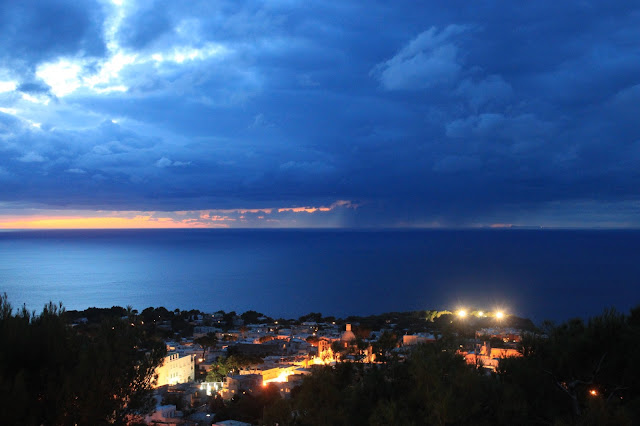 We woke up to terrible winds and rain with thunderstorms in the future and after a hearty breakfast the hotel recommended we catch a ferry to the mainland as early as possible to avoid being stuck on the island if there were cancellations.  So with that, and a very rocky rough ferry ride back, we headed to Roma. Pin It
Email ThisBlogThis!Share to TwitterShare to FacebookShare to Pinterest
Posted by aglobetrottersfare at 9:18 PM