That's Minori {a Few Days on the Amalfi Coast} 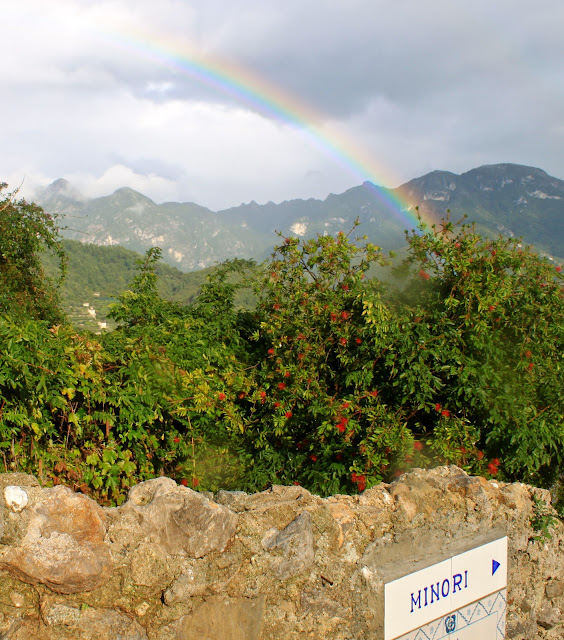 After a stop in Pompeii, we spent the next few {rainy} days in the small village of Minori, just south of Amalfi on the breathtaking Amalfi Coast.  A few years ago I had a calendar from 100 places to see before you die, and the Amalfi Coast Drive was featured as one of the 12 months.  Since then, I wanted to go.  Not surprisingly, it is on lists of "World's Most Beautiful Drives" all over.

Now, thankfully we had quite the courageous driver, because this drive is not for sissies.  With 1000's of turns, driving on snake like roads on cliffsides high above the torquoise sea, is not for the faint of heart.  My feet were clenching the entire drive.  I guess I do that when I am nervous.  Don't even get me started on the nerves when we passed giant coach busses full of tourists.  At some points, the road was barely big enough for one.

Our first day we awoke to a cloudy, slighty rainy Minori and of course some fresh espresso.  Fresh Italian coffee {and pastries} make everything better.  We contemplated what to do for the day.  Go for a wine tasting, check out Amalfi or Positano, hike to Ravello? 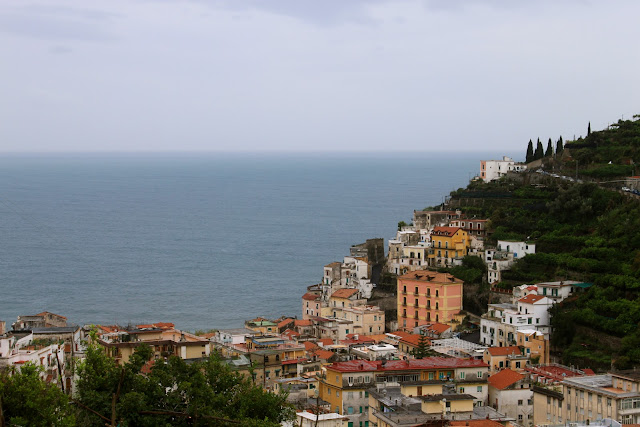 Since the forecast was only to get worse, we decided to attempt the hike to Ravello.  Ravello is situated just above Minori, and is said to be one of the most beautiful towns on the Amalfi Coast.  I had heard it is about an hour hike {uphill} and the views were amazing.  After a nice hearty gnocchi lunch, we headed for the hills {literally}. 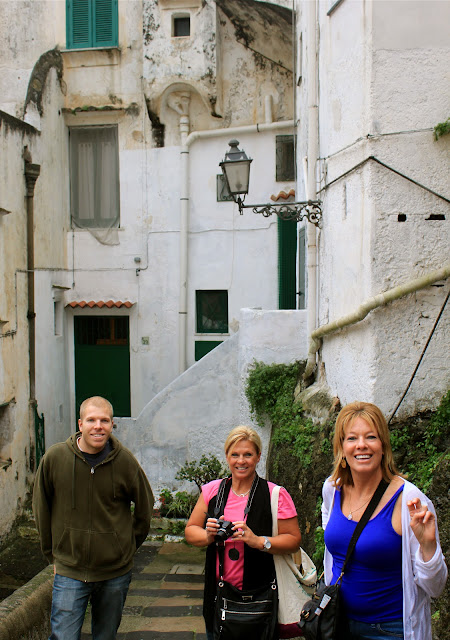 Well, we didn't last too long before it started coming down.  The rain was one thing, but then some serious lightening started. 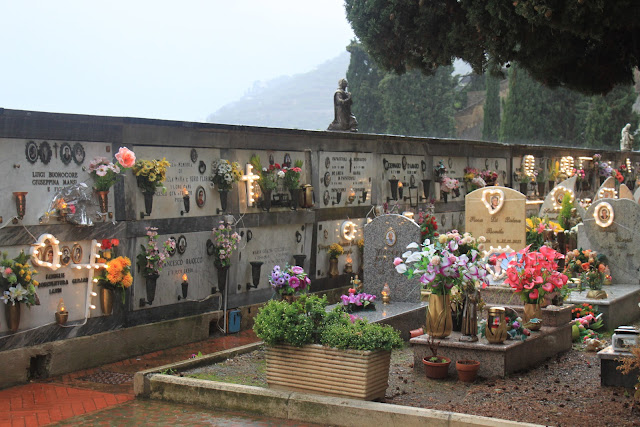 We took shelter in this ornate Italian cemetery.  I think it was one of the most well-taken care of cemeteries I have ever seen.  There were a few locals also taking shelter from taking care of their loved one's graves.  They told us the storm would pass, so we thought we would try again.  We made it about 4 minutes until we got freaked out from the lightening (at least I did (and I am pretty sure Julia too ;), and insisted we head back to Minori) and headed back down the hillside.  While we didn't make it to Ravello, we did make friends with the owner's of the local bar "Cafe Europa" and passed the afternoon nice and toasty with a few Peroni's.  Tomorrow would be another day. 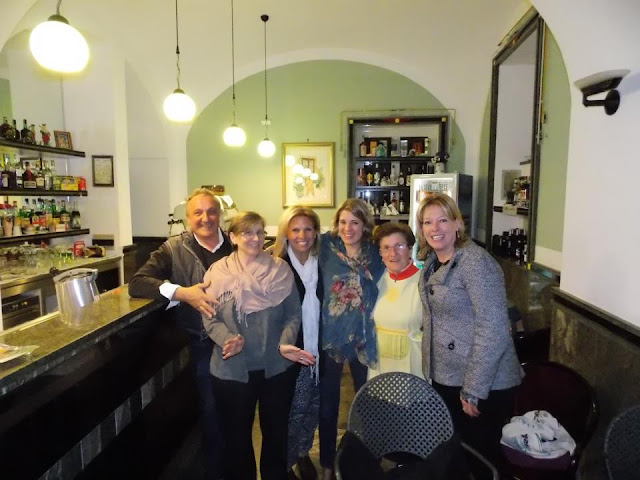 The next day, forecasted to be raining on and off, we decided to head to the neighboring town Positano, enjoy the drive along the coast, do a little lot of shopping, and a little eating.  We had our heart set on stopping at the popular Ceramiche shops, which sell hand painted Italian dishes, vases, tiles, tables, and pretty much anything else you can think of.  We found a large shop on the way and decided to make a pit stop.  Which was both a great and a terrible idea, depending on who you ask!  Let's just say they gave us free Lemoncello shots when we were done making our purchases, to calm Paul's nerves after the money that was dropped and of course, to thank us ladies :) 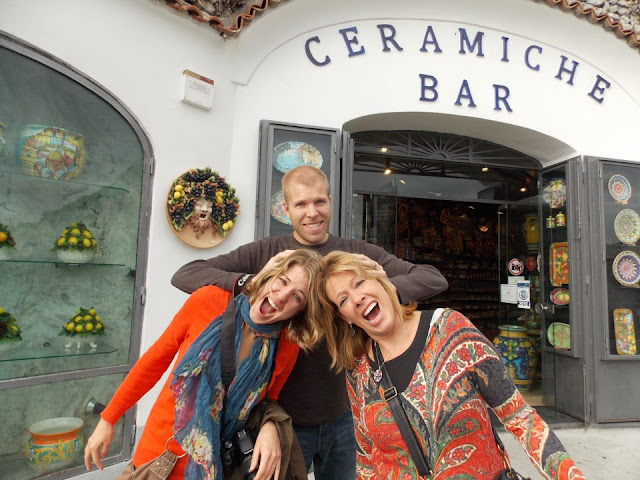 Then it was off to beautiful Positano. 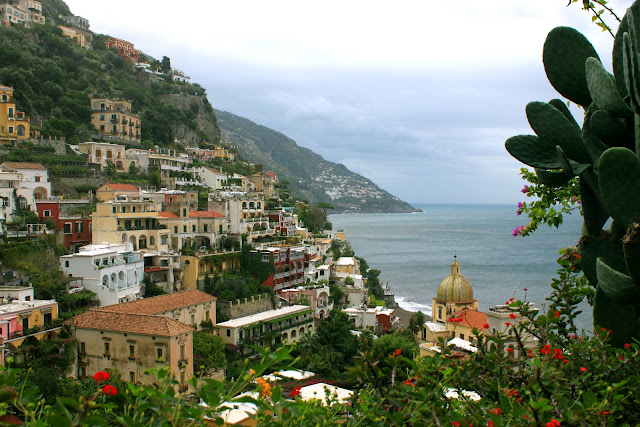 We spent the day walking around the village, enjoying the sites, and of course stopped for some
pizza.  A great way to spend a slightly rainy day on the Amalfi coast.

Being our last day in the region, Paul and I decided to attempt {again} the hike to Ravello, while the girls would spend another day shopping and sight seeing, this time in Amalfi. 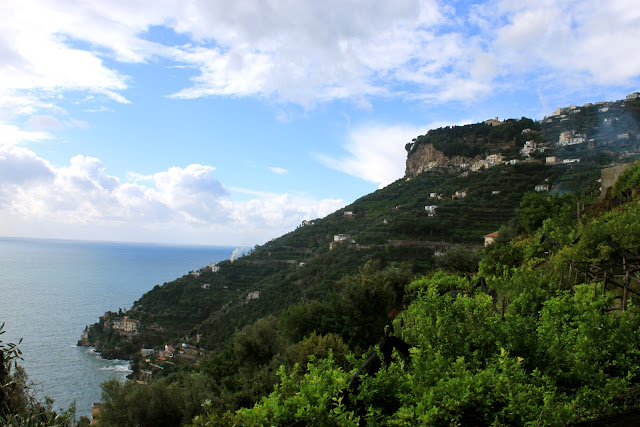 We enjoyed the views under the first blue skies we'd seen in the South. 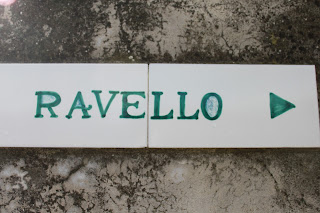 We climbed thousands of steps, sneaking peaks in people's gardens, viewing tiny colorful villages set just above the sea and saying hi to friendly kitties which seemed to be everywhere while we followed to signs to Ravello.


Paul even stole what I suspected to be a not-so-ripe olive.  Judging by his face, it was not so tasty.  He demanded water immediately. 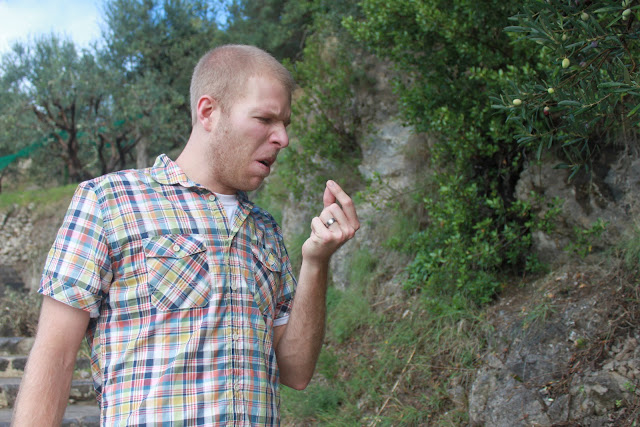 After about an hour of climbing, we arrived in the cute little village of Ravello, and with that the rain started.  We were planning on checking out the Rufolo Gardens, which I read are fantastic, but with cold wet feet, we opted for a nice cozy lunch instead, which did not disappoint.  After lunch, the rain had not let up, so we planned to meet the girls at our favorite spot in Minori for some afternoon Peronis, Cafe Europa.  Paul and I opted to take the bus down rather than fight the rain.  However, after waiting for about a half hour with 20 other tourists, and still no bus, we decided we might as well just fight the rain and head back down on foot.  Well, I sure am glad we did because just when we were feeling cold, wet and depressed from the weather, the most beautiful thing happened. 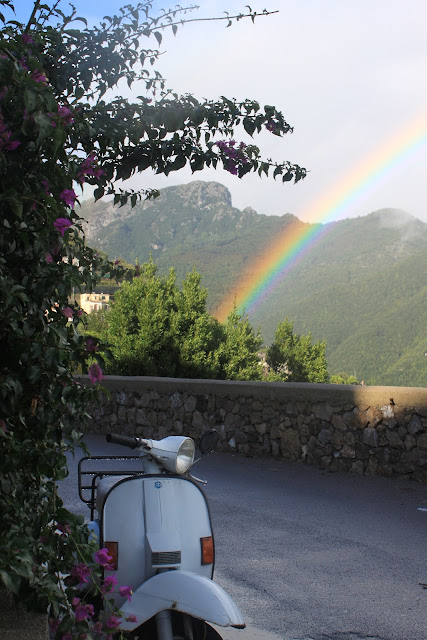 The rain finally let up, the most beautiful and vibrant rainbow appeared right over Minori. 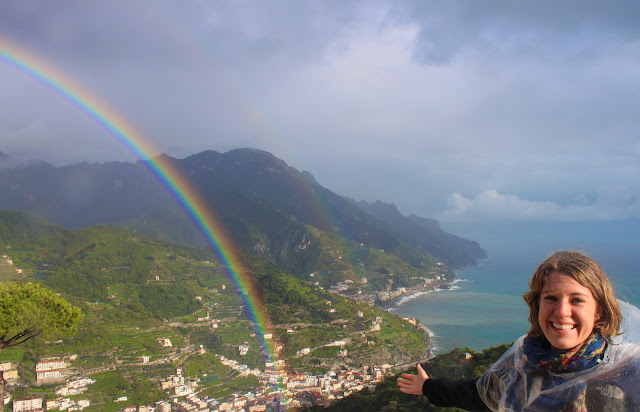 And then there were two.  I was happy ecstatic,  as you can see {you'll have to excuse my hair, though, and the poncho}.  It was a great last day on the Amalfi Coast.

Pin It
Email ThisBlogThis!Share to TwitterShare to FacebookShare to Pinterest
Posted by aglobetrottersfare at 7:58 PM

Hey! This is wonderful, catching up. Wishing I was there. Happy Easter 2914. I won't be seeing a card so refrain from holding your breath. I.m going to look for Charlie's eight month pictures now. Your yurt looked amazing. I love apricot Chobani! Notorius J.A.N.
upsiPsO nec

I absolutely loved reading this. I turn 40 in 2021 and my dream destination is amalfi coast